Radar astronomy is one of the most effective methods of Earth-based remote sensing of asteroids, comets and planets of the solar system. The size, shape, spin period, high spatial resolution radar maps, surface and subsurface physical properties can be obtained using radar observations. Such observations suggest a transmitting and receiving antenna systems, a highly sensitive equipment for detecting echo signals and a software for observations scheduling and data processing. The Institute of Applied Astronomy of the Russian Academy of Sciences (IAA RAS) regularly participates in international radar observations of Near-Earth Objects (NEOs) [1,2] and the Moon. Usually, the sources of radio signals are the 70-meter antenna of the Goldstone Deep Space Communications Complex (USA) and, until 2021, the 305-meter radio telescope located at the Arecibo Observatory (Puerto Rico), equipped with powerful transmitters. Detection of signals reflected from asteroids is performed with 32-meter or 13.2-meter radio telescopes of the Russian VLBI Network Quasar. The first radar observations in IAA RAS were carried out in July 2015 in collaboration with the Jet Propulsion Laboratory of the California Institute of Technology and the Goldstone Observatory. The object of study was the potentially hazardous asteroid 2011 UW158 during its close approach to the Earth.

Observations of the Moon 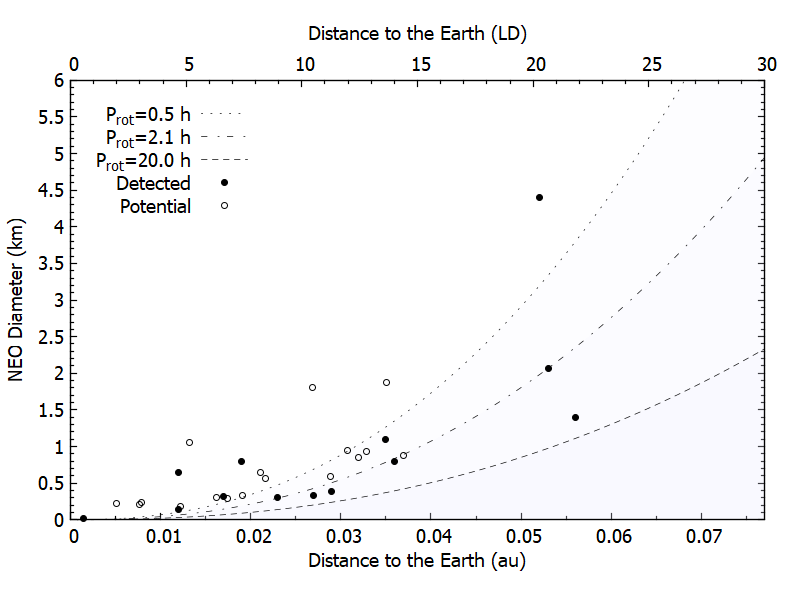 Radar detectability of near-Earth objects (NEO) for the RT-32 radio telescopes at 8560 MHz (3.5 cm). The dashed lines show the distance at which echoes from the NEOs with a given diameter can be detected at signal-to-noise ratio of 5. Calculations assume a signal transmitted by a 450 kW radar with a gain of 74 dB and reflected from a NEO with a rotation period of 0.5 h, 2.1 h, and 20.0 h and a radar albedo of 0.1 for the corresponding round-trip signal propagation time. The filled circles correspond to the NEOs detected on the RT-32, and the empty ones represent potential radar targets in 2022-23.