The "Nautical Astronomical Yearbook" (NAY, in Russian) had been published since 1930 by the Russian Academy of Sciences. The main content of the Yearbook is the daily tables containing data for the calculation of the local hourly angles and the declinations of the Sun, Moon, Venus, Mars, Jupiter, Saturn, and also 160 stars at any time moment. The times of rise, set, culminations of the celestial bodies, twilights, phases of the Moon, and the azimuths of sunrise (sunset) of the solar upper limb are calculated with the help of NAY. The ephemerides have the accuracy 0.1'.

Also NAY contains the tables of apparent places of stars, of the azimuths of Polaris, the tables for latitude determinations from observations of Polaris and seven applications (one of them is the main interpolation tables for calculation of altitudes and azimuths TAA-57).

The explanation containing examples illustrates an opportunity of calculations of various ephemerides at any time and a place of observation.

The data of NAY can be used not only in naval practice, but also in aircraft, in expedition's works, and astronomers.

The sample of a two-page opening of daily tables NAY: 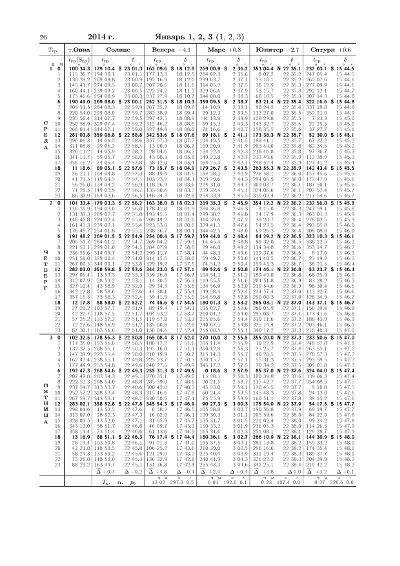 MAY is distributed by Cartographic Technology Centre (E-mail)