The first China’s lunar surface exploration mission using a lander and rover. It was launched in December 2013 as part of the second phase of the Chinese Lunar Exploration Program that has the ultimate goal of manned flights to the Moon. Chang'e 3 achieved lunar orbit on 6 December 2013 and successfuly landed on 14 December 2013. The lander was equipped with a transceiver device (transponder) operating in the X-band. The transponder is designed to receive a 7.2 GHz Earth to Moon uplink carrier wave signal and its coherent phase-locked re-radiation from Moon to Earth at a frequency of 8.47 GHz. Using this equipment Lunar Radio Ranging (LRR) technique was implemented, which allows us to measure the station position by means of independent observation.

Spectrogram of Chang'e 3 spacecraft signal obtained from observations of the RT-32 radio telescope at Zelenchukskaya observatory on April 26, 2019. The frequency of the spacecraft transponder is represented by a bright line changing with time. 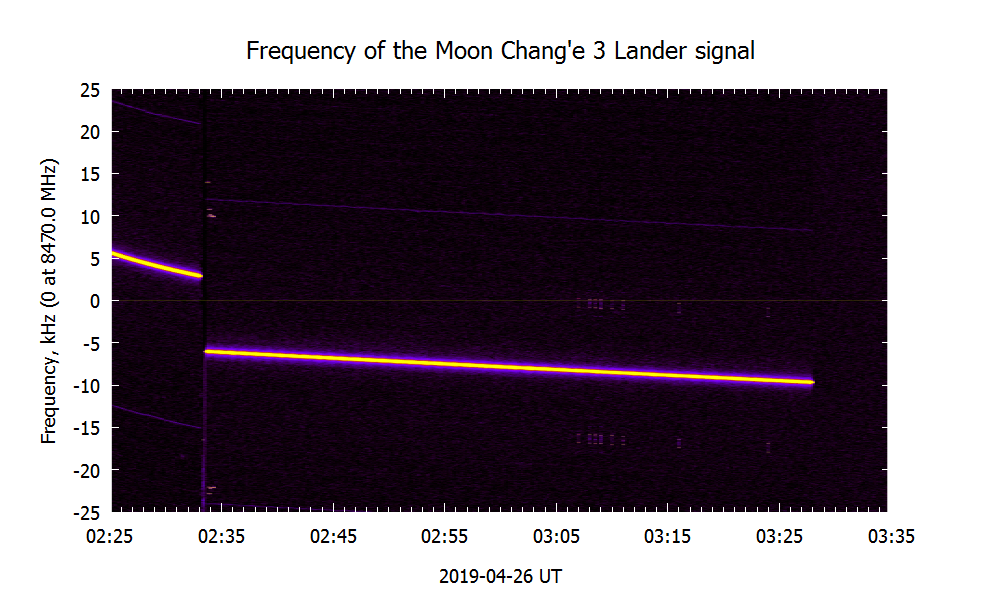 The spectrogram of Chang'e 3 lander onboard transponder signal during one of the Lunar Radio Ranging observations. The spectrogram shows that the change of the transmitting ground stations occurred at 02:33 UT, and the observation session ended at 03:28 UT.

This section is under construction...